During my stay as a Fulbright research scholar in the US, I was invited to a Thanksgiving dinner by Andreas Scherrer, a concert agent, owner of Company of Heaven who, ten years ago, moved to Harlem from Austria and married viola player Judith Insell. The following is a report on the event. 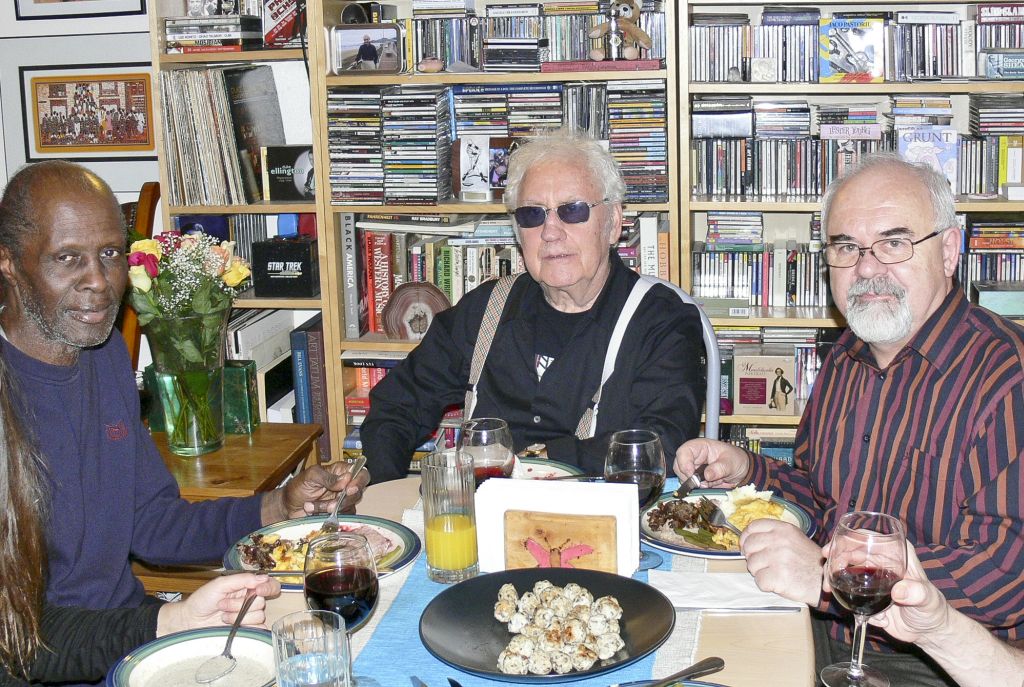 East 152nd Street, between St. Nicholas and Amsterdam Avenue. The street of the Harlem Dance Theater. The real Harlem. I got out of the subway at East 145th street at 10 minutes to 3 pm. It took half an hour ride by the express train from the World Trade Center, the end station of the PATH, my carrier from my residence in Newark, NJ.

An impressive building, fifth floor, narrow staircase, no elevator. Inside the flat, a long corridor with rooms and spaces opening to the left. I happened to arrive with an elderly black man, who later was introduced as avantgarde saxophonist Charles Gayle. We entered the living room to find saxphonist Lee Konitz and drummer George Schuller greeting us.

That was a real surprise. When receiving the invitation, I planned to conduct an interview with Andreas’ wife, for during my three months stay in the US, I had had hardly come across black musicians. I realized though, that this was not the right time for such kind of discussions. I had no information on who else would be participating in the dinner.

Lee and  George were watcing TV. It was the famous Macy’s street parade, a show that was originally broadcast live in the morning, with famous pop stars acting as if singing for the music. Lee, who lives in West 86th street, said he had planned to  watch the parade in the morning but could not approach it because of the huge crowd. Now he had another chance to enjoy it. I mentioned that ten years ago in New Orleans I saw hundres of people comfortably watching the Mardi Gras parade sitting on top of portable ladders. He did not seem to by the idea, rather, he asked George to turn down the sound volume whenever ads interrupted the show.

I also hinted at our meeting some twenty years before, an event that seemed more memorable for me than for him. In 1994, while working in London, UK as Cultural Attaché of Hungary, I set out to listen to the Lee Konitz/Attila Zoller/Don Friedman Trio at a club, mostly for Zoller who was a fellow Hungarian. I visited and spoke with them backstage after the gig. Oh, yes, Konitz nodded, he remembered the tour.

As he had returned from Hungary just two days before Thanksgiving, I asked him how he liked Budapest and the venue. Ha answered that it was ok. I also asked how often he performed these days. Not very much, he said. That was a nine days tour, two cities in Spain, and London, Vienna, Budapest, days off during the trip. He was a bit reserved, still tired of the travels and suffering from jet leg.

I turned to George, son of noted musicologist and musician Gunther Schuller, mentioning that I had the pleasure to listen to his bass player brother Ed in the eighties, who performed in Budapest as a member of the Paul Motian Quintet with Joe Lovano, Jim Pepper and Bill Frisell.  „That was a great band” – noted George with pleasure.

There was a low key, relaxed atmosphere. I, too, was asked about my job and backgrounds. While touching on baseball, favourite subject of most American males, George inquired about the fields of sports that Hungary excels. I proudly referred to the eight olympic medals our sportsmen and women won at the London games last year. It was a good feeling that we ranked higher than Austria, our more developed neighbour.

It soon became evident that the two saxophone players did not know each other. Occasionally they got engaged in small talks. Lee started to ask Charles about a female pianist, wife of a saxophone player whom he had met many years before but Gayle said he did not know who it was, though his wife also used to play the piano back then. Lee also asked whether he had ever been addicted to alcohol, as Gayle was drinking orange juice now. Never, answered Gayle. He had not find wine delicious enough, had light beer sometimes instead. Lee remarked that he had never been a heavy drinker either. However, he asked for a glass of red wine for the steak that Andreas was pleased to serve from his Austrian collection.

At one point someone made reference to Woody Allen who regularly plays dixieland at a hotel in New York City, and is beleived to practice his clarinet two hours a day. Lee remarked he did not remember when he practiced his instrument that much. He is practicing while performing, he said.

While time passed by in a pleasant way for us, our hosts had their hot job in the kitchen. Dinner was ready by 5 pm. We lined up for a great variety of food with our plate. Turkey, steak, bacon, macaroni with cheese, boiled green beans, smashed potato, sauces, etc., and creamy mushroom soup for starter. Everybody’s plate was filled with too much food but Andreas said that was Thanksgiving, we were not supposed to eat all the stuff.

Having his dinner finished, Lee left the table and went to the dining room, complaining about his aching stomach. He sat down on the sofa and soon fell asleep for a couple of minutes. Well, he is 86.

I have feelings at similar situations that there are musicians who do not feel inclined to seek out for all the information in the world. They live their own life, working on their music, while bombs keep dropping in their neighborhood.  But this is ok, if they focused more on issues other than their own business, there would not be as many genuine artistic endeavors on Earth.

During dinner we had another guest joining us, a concert agent who works for classical musicians in Cuba and Latin America. She was a dynamic young lady who had visited Hungary a couple of times. Lee introduced himself as Leon, a name sometimes used by his friends, he said jokingly.

After three hours stay at Andreas’ and Judith’s place, I had to make my leave just before the dessert was served, as I had another meeting scheduled for 7 pm with pianist Matthew Shipp at Lower East Side. I invited Andreas to take some pictures with Lee and myself. Lee said he did not like flash, so I suggested him to take on his sunglasses that he used to wear during dinner. He left his regular ones at home. He acted accordingly, while I did him another service by straightening his twisted suspenders. Finally, he said a friendly good bye to me but seemed as if he wanted to say something else, too. 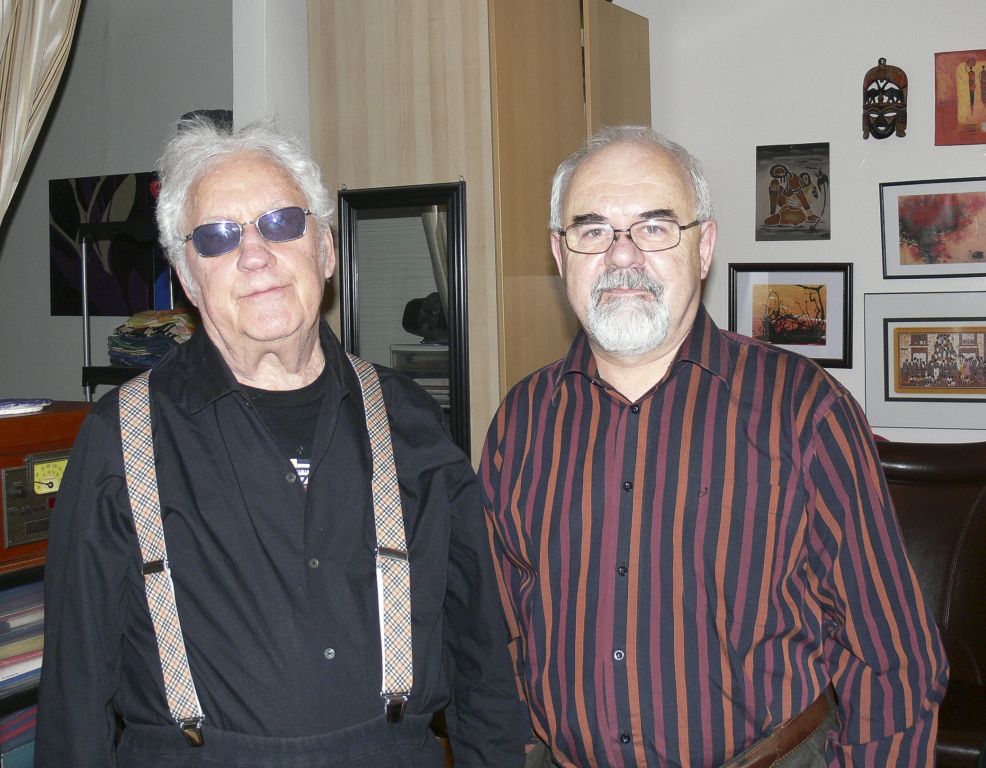