For decades, Eastern Europe has been taken more as a satellite of the Soviet Union than as a campground for jazz. Jazz, however, has some roots in most Eastern countries and, from a political point of view, has played a significant role in the fight for freedom and human rights during the decades of totalitarianism. 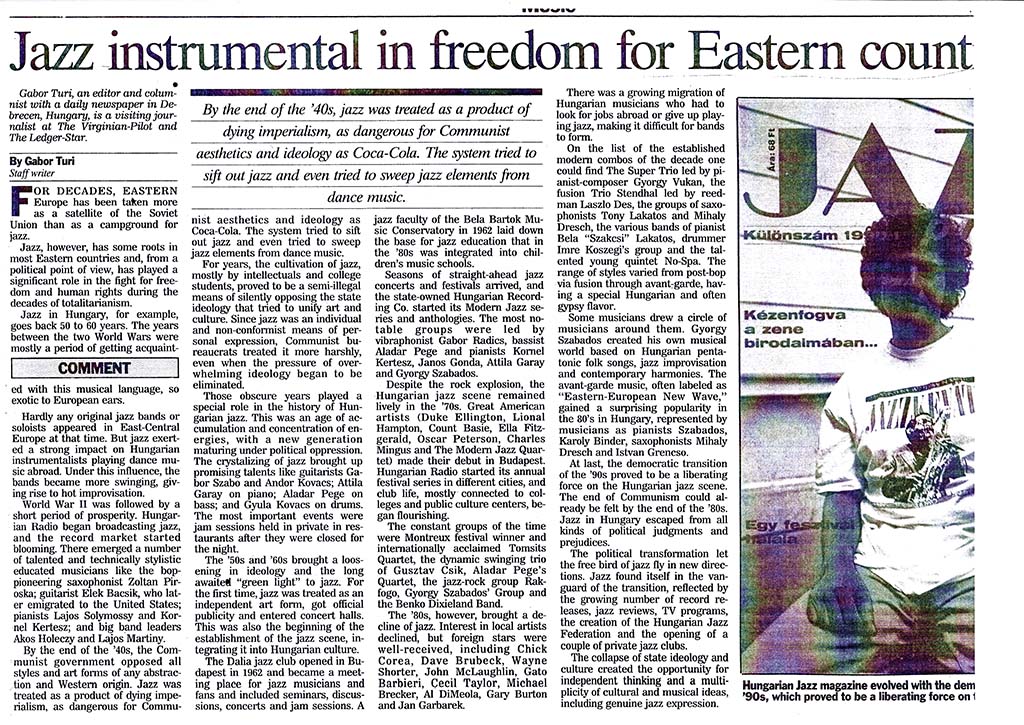 Jazz in Hungary, for example, goes back 50 to 60 years. The years between the two World Wars were mostly a period of getting acquainted with this musical language, so exotic to European ears.

Hardly any original jazz bands or soloists appeared in East-Central Europe at that time. But jazz exerted a strong impact on Hungarian instrumentalists playing dance music abroad. Under this influence, the bands became more swinging, giving rise to hot improvisation.

By the end of the '40s, the Communist government opposed all styles and art forms of any abstraction and Western origin. Jazz was treated as a product of dying imperialism, as dangerous for Communist aesthetics and ideology as Coca-Cola. The system tried to sift out jazz and even tried to sweep jazz elements from dance music.

For years, the cultivation of jazz, mostly by intellectuals and college students, proved to be a semi-illegal means of silently opposing the state ideology that tried to unify art and culture. Since jazz was an individual and non-conformist means of personal expression, Communist bureaucrats treated it more harshly, even when the pressure of overwhelming ideology began to be eliminated.

Those obscure years played a special role in the history of Hungarian jazz. This was an age of accumulation and concentration of energies, with a new generation maturing under political oppression. The crystalizing of jazz brought up promising talents like guitarists Gábor Szabó and Andor Kovács; Attila Garay on piano; Aladár Pege on bass; and Gyula Kovács on drums. The most important events were jam sessions held in private in restaurants after they were closed for the night.

The '50s and '60s brought a loosening in ideology and the long awaited "green light" to jazz. For the first time, jazz was treated as an independent art form, got official publicity and entered concert halls. This was also the beginning of the establishment of the jazz scene, in-tegrating it into Hungarian culture.

The Dália jazz club opened in Budapest in 1962 and became a meeting place for jazz musicians and fans and included seminars, discussions, concerts and jam sessions. A jazz faculty of the Béla Bartók Music Conservatory in 1965 laid down the base for jazz education that in the '80s was integrated into children's music schools.

There was a growing migration of Hungarian musicians who had to look for jobs abroad or give up playing jazz, making it difficult for bands to form.

On the list of the established modern combos of the decade one could find The Super Trio led by pianist-composer György Vukán the fusion Trio Stendhal led by reedman László Dés, the groups of saxophonists Tony Lakatos and Mihály Dresch, the various bands of pianist Béla "Szakcsi" Lakatos, drummer Imre Kőszegi's group and the talented young quintet No-Spa. The range of styles varied from post-bop via fusion through avant-garde, having a special Hungarian and often gypsy flavor.

Some musicians drew a circle of musicians around them. György Szabados created his own musical world based on Hungarian pentatonic folk songs, jazz improvisation and contemporary harmonies. The avant-garde music, often labeled as "Eastern-European New Wave," gained a surprising popularity in the 80's in Hungary, represented by musicians as pianists Szabados, Károly Binder, saxophonists Mihály Dresch and István Grencsó.

At last, the democratic transition of the '90s proved to be a liberating force on the Hun­garian jazz scene. The end of Communism could already be felt by the end of the '80s. Jazz in Hungary escaped from all kinds of political judgments and prejudices.

The political transformation let the free bird of jazz fly in new directions. Jazz found itself in the vanguard of the transition, reflected by the growing number of record releases, jazz reviews, TV programs, the creation of the Hungarian Jazz Federation and the opening of a couple of private jazz clubs.

The collapse of state ideology and culture created the opportunity for independent thinking and a multiplicity of cultural and musical ideas, including genuine jazz expression.

(Gábor Turi, an editor and columnist with a daily newspaper in Debrecen, Hungary, is a visiting journalist at The Virginian-Pilot and The Ledger-Star.)